D’russa. If for most of the young people a money of Rp 50 thousand is only enough for the money for a day or to buy the package Internet packages, then another for a RUSDI Raisa. Only from a piece of money Rp 50 thousand RUSDI started the handicraft business D’Russa.

One time RUSDI ordered a cellphone holster from a leather product craftsmen. Apparently many people are fond of the product. From there, there is an idea to run a business by producing a cellphone holster. With a capital of 50 thousand rupiah, he started making handmade gloves from the skin waste. In the beginning, RUSDI had difficulty buying leather sheets with minimal capital. The skin price of the sheet is Rp 12 thousand per foot. But he was not discouraged just with it. Rusdi finally decided to buy skin waste as much as 2 kg from the remnants of leather craftsmen in Garut, West Java. The waste of the skin he bought with price only Rp 20 thousand. The remainder of his capital was used to buy equipment, such as glue and needles.

In order to cultivate skin waste, RUSDI can not study alone. He learns to make a cellphone holster from a leather craft artisan who happens to be his own friend. After a month of knowledge, RUSDI was able to produce his own mobile phone. He said the waste can be made into a cell phone casing of 70 units. This product differs from similar products circulating in the market because it is stitched using leather threads.

Since then RUSDI began to venture small business as a manufacturer and seller where the phone is from the raw material leather. Choosing the manufacture of products from the skin raw material because RUSDI has long since liked the goods of leather products.

The handmade RUSDI handicrafts were bought by friends at the campus. The man who had this fishing hobby grossed more than Rp 1 million. RUSDI has branded D’russa for its product, which stands for its long name, RUSDI Raisa. In order to create a cool branding, she pinned the word D in front of Russa.

RUSDI then developed other variants of D’russa products such as bags, wallets, jackets, and various other accessories. The price ranges from Rp 100 thousand to Rp 6 million. With the effort RUSDI can earn an average turnover of Rp 400 million every month. The value is equal to Rp 4.8 billion per year. RUSDI Raisa has high creativity in developing premium leather handicraft business.

D’russa products are now not relying on skin waste anymore. The material used today is a premium quality sheet leather. RUSDI is able to produce bags, wallets, jackets and assorted leather accessories for retail and corporate markets. According to him, bags and wallets are the most preferred products by customers.

One of the target market of D’russa is the major cities in Indonesia for companies for the procurement of merchandise, and some countries such as Australia, Japan and Canada.

Some companies that have ordered D’russa products are PT Tugu Pratama Indonesia, pt Bank Rakyat Indonesia (Persero) Tbk., PT Dimension Data, PT Ahendo Inti Perdana, PT Bakrie Pipe Industries, PT Sari Husada, and government agencies, such as Ministry of Finance and Ministry of State Secretariat. Not only that, D’Russa also got a booking from a number of brands that entrusted its production to D’russa.

D’russa Product Excellence is using premium quality leather at affordable prices processed in D’russa’s production house. Authenticity, quality and classic design are guaranteed because it is stitched by an experienced tailor.

In order to fulfill consumer orders, RUSDI relies on supplying raw materials from leather providers in West Java. Each month, the average skin needs of the sheet RUSDI is needed as much as 4 thousand-7 thousand feet. “Of that amount, 70% is derived from cow skin, 20% goat skin, and the rest of snake skins, buffalo, crocodiles and kangaroos,” he said. The production process was done by 30 D’russa employees.

Before gaining all of that success, RUSDI must be willing to struggle and coach in the early phase of his efforts. He had been deceived, unpaid, paid for damages, or his products were insulted by consumers. He has paid compensation of Rp 24 million to consumers because it is not able to fulfill large quantities of orders. RUSDI was forced to sell his personal belongings, such as motorcycles, to cover the losses. His efforts were almost as good at the time. However, his unsatisfying experience was considered his business teacher.

So, for the craftsmen friends who are trying. Experiencing sadness, being deceived, insulted, betrayed, is not appreciated. Never give up, consider it all a teacher who has you. If you stop, then Habislah already. Remember that the Lord will only give his gift to the person who deserves to receive it. Skip it all and bounce yourself to receive the result.

To know other handicraft products click the link: mariministe.


We believe that Indonesians have the creativity to create quality works. Keep le
arning, keep working and always synergized.
Marikarya, it is our work 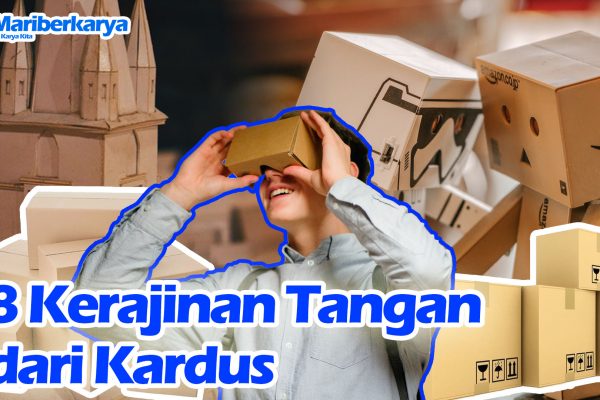